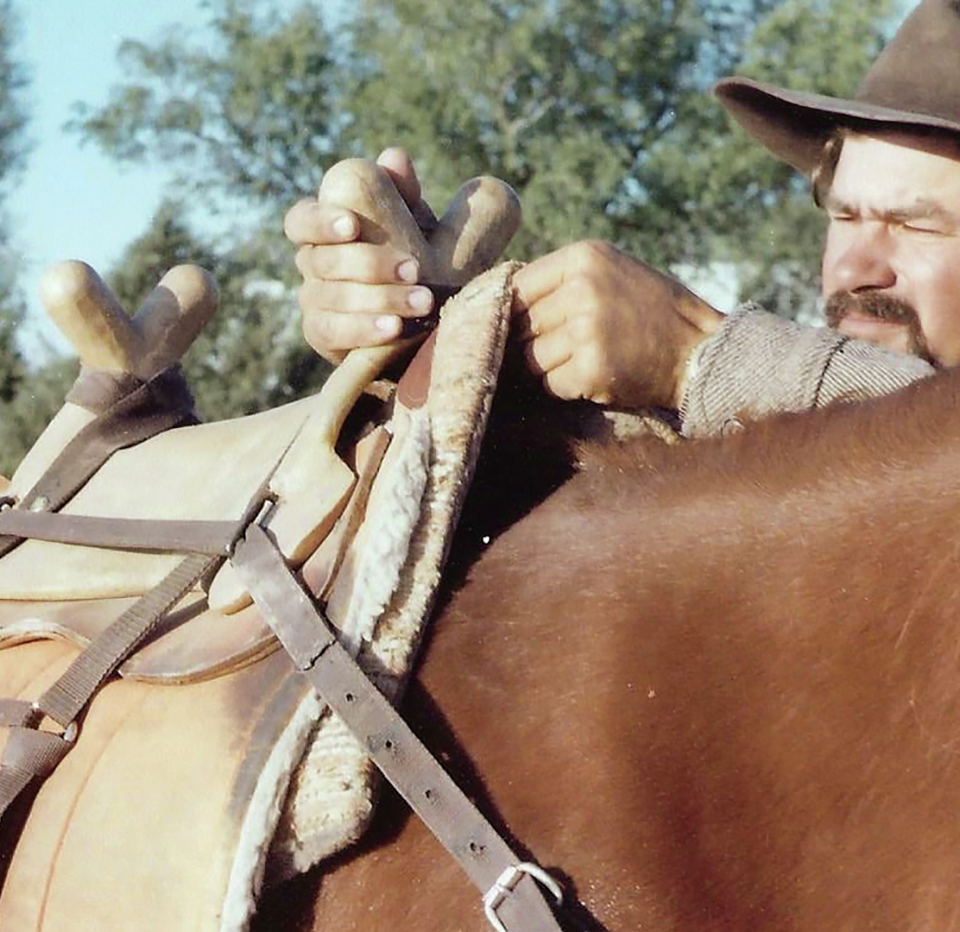 My horse & saddle experience began by preparing for a 3,000 mile trip living outdoors with 2 riding horse's and 3 packhorses. I made what we wore, saddles, guns, & gear that more suited living outdoors and being in the saddle 60 hrs a week. I couldn't buy what I thought would suit the real needs of living outdoors as in the 1890s. Myself and the young lady that accompanied me brought back the same 5 horses in better shape than they were before the trip. That was 1982 and the trip lives within us today.

After the 8 month trip I decided to start selling saddles like the one I made for the trip. Al Cunningham & Mary Veach of Branson,MO. built the 1st few saddles for me. They were okay but I experimented on a way to keep the leather skirts from the eventual fatigue that takes place. That is when the 1st ORTHO-FLEX SADDLE was born. It became popular very quickly and I patented the idea. The 1st version and patent was fantastic in it's performance on the horse. A year or two in service and I had to replace the panels in 150 skirts because they fractured. I had molded them to the basic shape of a horse. Once attached front and rear to the saddletree, they fractured after extended use. I found you can't bend compound curves in opposite directions without fracture at the mountings. More patents to make the system last and I started selling to Ropers like Dennis Capple. I called a gentleman by the name of Dee Pickett to see if he was interested in trying the OrthoFlex Roper in 1993. He didn't think it would work but said he'd try it. By this time OrthoFlex was a multi-million dollar a year business & growing. I had a new sales rep, Frank Johnson, that grew up Roping in Texas. I sent Frank with my Schwabe 3ton CABOVER custom hauler & living quarters trailer to Chicken Dinner Rd., Caldwell, ID. to see Dee Pickett. 2 times World Champion All Round Cowboy. On the way, Frank stopped at Western Horseman Magazine in Colorado Springs, CO. He and Staff roped for an afternoon on their stock. They used the OrthoFlex Roper with no pad at all. That was for demonstration purposes & they were impressed. I didn't use Western English Sales Asso. Rep's to pedal my product though & they wouldn't do an article on this unusual day of which they had photos. The magazines have year round offices at WESA's Denver Mart. They are "close" to all the Reps that service this 60 billion dollar a year industry for a small 10 to 15 percent comission. As a company in this field you get no Positive Publicity without paying a Sales Representative of WESA to  wholesale on to retailers .

So on to Dee Pickett. He Roped with Frank using no pad for the test. He was impressed. He kept my roping saddle to use in competition and test some more. After a while we reached an agreement for him to promote the saddle hands on. I paid him and he helped me develope product. Constant feedback on saddles, horse's problems, Girths & pads taught me a lot. I spent most of my time overcoming the small things in product like Cinches, shims & pads.

Dee asked me early on; "Can you put your system in a regular roping saddle?" I told him I could & that started the process of converting the favorite saddles of hundreds of top ropers around the country. Clay Cooper, Joe Beaver, & Fred Whitfield were just a few of those that paid grand for conversions after roping on an OrthoFlex Once or Twice.. I soon started my own saddletree company & built the Clay Cooper > Low Dally Roper. Clay loved it for his own comfort and what it did for his horses. The USTRC was run by Denny Gentry at the time. He bought his own Clay Cooper LowDally Roper as did Denis Carroll. Denis owned 30 or so companies around the country & he loved to rope. He later went on to obtain Cactus Saddlery & related companies.

WHY YOU DON'T SEE ME ADVERTISING IN SUPERLOOPER OR AT THE USTRC CHAMPIONSHIPS IN OK.CITY ANY MORE?:  The Team Roping Asso. was in line to be bought by Florida Investment Partners, an INVESTMENT BANKING FIRM. They were doing a ROLL-UP of the Roping Industry and tried to buy OrthoFlex from me at that time. MARTIN SADDLERY was a more reasonable acquisition as was SuperLooper Magazine.

They did their ROLL-UP and started Equibrands shortly thereafter. More in moment.

After that, it was obvious, any money I spent on advertising in SUPERLOOPER was just paying for MARTIN AND EQUIBRANDS TO DO THE SAME. TO PAY MY COMPETITORS ADVERTISING BILL AND LET THEM GET ALL THE FREE PUBLICITY RANKLES ME. IT DOES MANY OTHER INDIVIDUAL OTHER COMPANIES AS WELL. THE USTRC ROLL-UP was then sold at a nice profit to an INVESTMENT BANKING FIRM OUT OF CHICAGO. About that time, Denny Gentry left and started the "WORLD SERIES ROPING" venture he still heads. The one that pays the most back! Where there's big money there are larger companies that are ready with CASH to do a ROLL UP in that NITCH. They CREATE HEALTHY PROFITS WITH LESS COMPETION in the marketplace. The ROPER gets squeezed for the PROFIT in: entry fees, membership dues, almost anything you buy or win when roping GOES> RIGHT TO OBAMMA'S BUDDIES IN CHICAGO. Welcome to the real world of Roping ! I'm quite content to stay in my corner and keep making the best product I can. WHAT'S REAL NEVER DIES. WHAT'S FAKE IS FINALLY FOUND OUT AND CEASES TO EXIST.  I'm still around after 30 years and am enjoying the challenge. Regards ROPERS,  Len Brown

Get out your < MASTERCARD, Discover, VISA or American Express > and CLICK HERE to ORDER or view Spec's & PRICES on Western Correctors, English Correctors,OR Black Mesa Saddletrees. Thanks, Len PS: Or you can call me & I'll take your order if you prefer. 816 625 0333